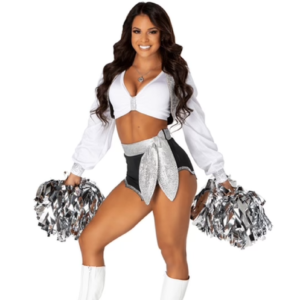 Triple threat has given me the foundation of the dancer I am today. All the private lessons, countless hours, and extra rehearsals with triple threats fabulous instructors has assisted in earning my dream spot on the Raiderettes. I am now a 4 year veteran, 1x co captain, hold Dancer of the Year 2020 for the Raiderettes, and am currently captain of the 2022 team. None of this would have been possible without the help and support of my TTPA family.

Triple Threat not only gave me a dance foundation but has also endless opportunities to grow in my dance teaching abilities. At age 15, I started assisting teachers and soon enough became part of the staff once graduated. I now have taught at multiple studios in california and Nevada, as well as hold online zoom classes. 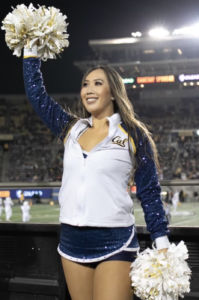 Margie was a dancer at TTPA for 6 years. In addition to training in a variety of styles and competing in dance competitions, she choreographed routines and taught classes. After graduating high school, she went to UC Berkeley and was on the Cal Dance Team for 3 years, leading the team as a Co-Captain during her senior year. She is currently in her first season as a professional NBA dancer and works in executive consulting at a professional services firm. 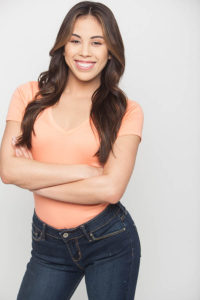 Brooke trained with Triple Threat Performing Arts for 6 years. She was then accepted into the prestigious Edge Performing Arts scholarship program in Los Angeles. A year later, she signed with Bloc Talent Agency. Brooke’s first job in the entertainment industry was with Mariah Carey in her “Keys of Holiday’s” Youtube Red special. She can beseen in music videos for Snoop Dogg and the British artist Hrvy. Brooke has starred in national commercials for both Nissan and Ford. She also is the only dancer in a promo for Probiotics. Brooke has been featured on a TV show drama called Hit the Floor and also Dancing with the Stars the Disney Descendants special.

One of Brooke’s favorite kind of job was with Demi Lovato because they were live performances. Being on stage, in front of a live audience really enhances the energy in the venue. Brooke has performed on the MTV VMA’s, Good Morning America, “Iheart Radio Music Festival”, “Target Live”, and “Billboard Hot 100”. Currently, Brooke resides in Los Angeles, where she hopes to continue to have a diverse career in the entertainment industry.

After training and competing for 11 years with Triple Threat Performing Arts, Jacy moved to Los Angeles to pursue her dance career. One year later, she signed with Universal Dance and Talent, and is working under the R&B and rap singer CIARA. Jacy performed in the 2008 MTV Video Music Awards, dancing with the Jonas Brothers and TI. She can also be seen weekly on ABC and ESPN in the opener for Monday night Football with Hank Williams Jr. She danced in the movie “easy A,” featuring Amanda Bynes and Penn Badgely. She also attended Orange Coast College, where she was a part of the dance team which won a national title in hip hop and was aired on ESPN.

She graduated high school with a diploma in performing arts and got the opportunity to assist Brian Friedmen and many others for the company dance convention. She was in Dance Spirit Magazine As a future star award winner, along with being titled National Miss Dance USA and Super Grand Champion In Las Vegas, she has worked on projects like the Hannah Montana Movie and D. Woods from the Danity Kane music video “Legalize Me.” Jacy does choreography and teaches for Front and Center and Cutting Edge dance studio, Aside from being the head coach of the Edison High School Song team, she can also be seen on the Anaheim Arsenal basketball court, cheering on the team. She hopes to continue in the entertainment industry and help motivate dancers to be the best they can be.

KC Fredericks began dancing at age 12 in his hometown of Trinidad, CO.  A  move to the bay area and Triple Threat Performing Arts allowed him to expand his training, preparing him for the professional dance world.  KC competed regionally and nationally, earning him the titles of Mr. Teen Dance America, Mr. Dance USA, and Mr. Global Dance.  He also earned numerous scholarships allowing him to train at Broadway Dance Center and STEPS on Broadway in NYC.  A one-year tour with the bay area’s Off-Balance Dance Co. lead him to southern California where he continued the pursuit of his dance career.

KC has since worked in the commercial and theatrical industries of San Francisco, Los Angeles, New England, and regionally throughout the country.  He was a founding member of RhetOracle Dance Co. of Long Beach, CA and also danced with Odyssey Dance Theatre of Salt Lake City.  His film credits include The American Mall (MTV) and Disney’s High School Musical 3: Senior Year.  In addition to being a working actor, KC is also in pursuit of his degree in Nutrition and Dietetics.  He has toured with the National Tour of CATS and most recently toured the country playing Chistery in the Broadway National Tour of WICKED.  In New York, he has been seen dancing back up for Nicki Minaj as well as for Nokia, O.C. Tanner, and MAC Cosmetics.  KC currently resides in New York City where he is chasing his Broadway dreams.

Amanda is a native Californian where she trained in dance since the age of three.  She resides in New York City and has been on the faculty of the national dance convention NRG Dance Project for five years.  This year she was interviewed and highlighted in a cover story about NRG by Dance Informa Magazine.    Amanda has performed at the Super Bowl, as well as with Lenny Kravitz, Lee Ann Womack, Green Day, Constantine Maroulis, and the Duke Ellington Orchestra.  She currently does choreography for the New York Jets Cheerleaders Show Team and was a NFL cheerleader for the Jets for five years and graced the pages of her team’s swimsuit calendar.  Presently Amanda has her CD, KARMA, available on ITunes, Amazon, Billboard and other music sites.

Both the Oakland Tribune and KRON TV dubbed her the “Queen of Tap” after she won the solo Tap Title at the World Cup Dance Championships in Italy.  Her credits include:  Television– Mornings on Fox, So You Think You Can Dance, The CBS Early Show, The O’Reilly Factor, Fox and Friends, The Dr. Oz Show, NFL Draft Radio City, Madden NFL 12 Premiere, Celebrity Beach Bowl, Fox Business News, Good Morning New York, KRON Weekends, Jets Nation, and interviewed on KGO Talk Radio.  In Mexico City, she did numerous interviews and performances on Fox Sports, TV Azteca, and Sky TV.Theater– Recipient of two Dean Goodman Choice Awards for winning roles in “We’ll Take Manhattan” and “Rodgers and Hammerstein…with Hart”. Other credits include “A Chorus Line” (Bebe), “Beat It Down”, “We’ll Take Manhattan…Again”, and “Cabaret in Concert”. She was featured in “An Evening with Tai and Randy” with Tai Babilonia and Randy Gardner and toured Europe with the American Dance Company as a principle dancer.   She was also a soloist at the renowned Duke Theater on Times Square in the “Broadway Dance Showcase”. Commercials – Post Cereals, Beach Body: Brazil Butt Lift, Kraft Foods.  She has been seen several times in both Dance Spirit and Dancer magazines, as well as Sports Illustrated.  In addition to her World Tap Title she also won the Miss Dance America title in Panama City, and the Miss Dance USA title in Las Vegas. During her competition career, in national championships Amanda won a combination of 28 number one overall and Miss Dance titles.  Amanda is an alumna of New York’s Hofstra University where she attended on a dance scholarship.  Amanda thanks Triple Threat Performing Arts for their guidance and much of her success.

Paige began training in all styles of dance at the age of three, most notably under the supportive and talented staff at Triple Threat Performing Arts. During her competitive dancing years, she won hundreds of overall titles, scholarships, and opportunities to dance with prestigious choreographers. After graduating from high school in 2009, Paige moved to Los Angeles to pursue both her degree in Political Science at UCLA and a dance and choreography career in her spare time.

Since 2007, her students and choreography have won numerous regional and national titles. Paige has also assisted multiple top choreographers including Jason Kalish of Hollywood Connection and Jessica Starr of Muse Dance Company. In 2011, she appeared in a national commercial for truecar.com. Most recently, Paige was selected to join and tour with the incredible Gregg Russell in his tap company, Tap Sounds Underground, starting in August of 2012. Although Paige plans to attend a distinguished law school when she graduates from college, she also hopes to continue dancing and choreographing for the rest of her life.